When planning your European city break, it’s easy to focus on the main cities of Europe, the political and financial capitals, but sometimes it’s worth venturing a little further to discover the hidden gems of the wider region.

Darmstadt is a city in Hesse, Germany with a population of around 150,000, located a little south of Frankfurt – about 20 minutes in autobahn time. Famous for being the birthplace of ecstasy, Darmstadt has now a predominantly industrial feel to it, the buildings of the old town meshing with the glass and steel of the science parks and modern commercial properties.

Pre World War II, Darmstadt was the capital of the Grand Duchy of Hesse, replaced post war by the nearby town of Wiesbaden. Much of the old city was destroyed by the carpet bombing of the Allies during World War II, and a lot of what is still standing was reconstructed after the war, however there are still some architecturally intriguing places to add to your itinerary.

Over the course of a weekend, Traveller and Tourist managed to fit in a day of touring Frankfurt (old and new) and an afternoon touring Darmstadt in a VW camper van (surely the best way!)

Darmstadt is a convenient launching pad for a visit to Mühltal to visit Castle Frankenstein (Burg Frankenstein) – The castle’s existence has been debated, with some claiming it is first mentioned back in the records of 948AD, and others dating it later to around 1252. Whenever it’s beginnings, it was indeed owned by the Barons von Frankenstein who owned most of the surrounding land until 1662, when the Baron of that time sold the property to the Landgrave of Hesse-Darmstadt. There have been claims that the castle may have inspired the Mary Shelley novel, Frankenstein – a notion that has inspired some of the best Halloween parties over the last 30 years or so. (While Shelley is known to have travelled through this area, it’s not known whether the castle was actually on the travel itinerary).

Once upon a time the castle itself was a massive fortress – sadly time has reduced that to a couple of towers and a chapel, although it should be pointed out that the towers are a later addition – the inner ward is mostly authentic, and you can still see what’s left of the old drawbridge. It’s still well worth a visit.

Darmstadt is also famous for its Jugendstil (art nouveau) buildings. Many of the buildings survived the massive destruction of Darmstadt in September 1944. We paid a visit to the Künstlerkolonie Mathildenhöhe 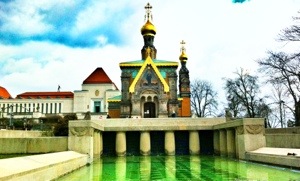 The artists colony was founded in 1899 by Ernest Ludwig who was the Grand Duke of Hesse. A philanthropist, he wanted to drive the local economy through a combination of art and trade. He brought together some of the finest Art Nouveau artists including Peter Behrens, Rudolf Bosselt, Hans Christiansen, and Joseph Maria Olbrich.

Wandering around this beautifully open space, surrounded by inspiring architecture and landscaped grounds was a wonderful was to spend a Sunday morning, and to explore an area that although on the tourist trail, was almost deserted – I guess we got there before the coaches did, so my advice is to go early.

James Cole is the Group Editor for Sailfin Magazines and oversees our titles and content creation. He's literally the person who dots our 'i's and crosses our 't's across our Home and Garden Magazine section, our Family and Parenting Magazine, our Life & Wellbeing Magazine, Our Travel and Tourism Magazine, and our Business and Work sections. View all posts by James Cole

Life Centric. An integrated approach to a positive life; looking holistically through the lens of style.

A combination of  family and parenting magazine; a house and garden magazine; life and wellbeing magazine; a travel and tourism magzine; and a business and work magazine.