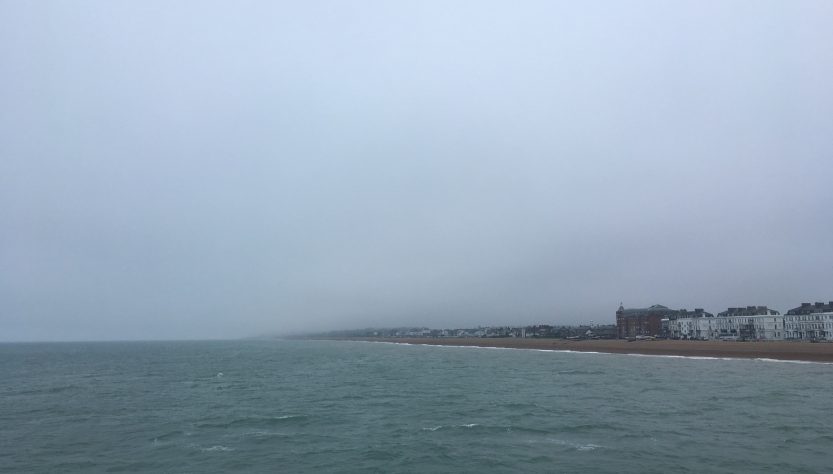 Here I am, at the little cafe at the end of the pier staring back at the world through the filter of a gentle fog, here in the little town of Deal on the east coast of Kent.

As I sit with a double espresso (decaffeinated) I took a moment of meditation; breathing in slowly through my nose and out through my mouth. All while trying to look like I’m not hyperventilating in front of the other cafe customers.

Although it was the second day after midsummers day, The buildings on the shoreline faded off into the mist and the wind whipped around the pier arms as the seagulls slid sideways hovering in the gusts. The only people in sight are the hardy fisherman with their red faces that look wind-beaten but happy. Even they are sheltered in the little alcoves running along the edge of the pier.

I am supposedly here in the height of summer and you would expect the pier to be thronging with people and the sounds of children running up and down. You would think that the pier would be full of Crablines hanging down the sides and the excitement of a bucket being tipped over and the crabs making their great escape along the boardwalk, but no, there was very little going on.

As I walked onto the pier, the man in the little pier office near the entrance nodded his head and he smiled looking at me strangely as I walked in carrying a rucksack and wearing a suit without a fishing rod in sight.

I wondered to myself if he wanted to know where I was going? I wondered if he was interested at all in the lives of the people who walk past? If he stops and people-watches, as we are all prone to do? Is he spending his day creating stories about strangers – stories that we will never get to test the veracity of? I also wondered if he didn’t care at all?

I wondered if a man in a suit appearing on a bleak misty foggy day was actually a sign of danger? Have the pressures of the world got to him? Is he planning on killing himself? Is he planning on jumping off the end of the pier? Is this the opportunity for intervention? Instead of nodding his head and doffing his cap, should he be standing up from his desk and asking “Excuse me. Good morning, how are you? How are you really?”.

All of the stories race through my head at 1,000,000 miles an hour. One of the dangers of having ADHD as an adult is that not only do your thoughts fly through your head quicker than you can process, let alone filter, you also have the emotional intelligence and experience to wonder not only ‘what are you thinking?’ But to jump ahead and answer that question (probably incorrectly) and end up focusing on the end point of myriad scenarios as a result of the imaginary conversations you’ve had with the hundreds of strangers in the past by every day. It’s exhausting.

In fact, I was having one of the best days I’ve had for a long while. I had taken the day off from work, and although I was still working, it was autonomously and taking on the tasks that I wanted to do in the places that I wanted to be. Sometimes it can take hard work to get used to be alone.

I started my day at the newly refurbished Deal Pier Kitchen, a cafe at the end of the pier head in Deal. The building has been beautifully finished and you can sit admiring the architecture behind a protective glass shield, staring out at a sunny day.

This day felt more like a wintry day and a blustery gale force day where the waves look like they’re trying to take out the concrete pier from underneath.

I’ve spent so many years sitting in an office under the fluorescent strip lights behind the laptop screen where yes, the world is infinite, but you have to access it through Safari or Firefox or another browser of your choice.

I often take myself to the beach where there is nothing around and preferably no people. I sit and stare into the middle-distance and listen to the waves as they rhythmically move out, move in, move out; as part of a never-ending pattern within a larger pattern of tides moving in, moving out, moving in, moving out throughout the day, the week, forever.

When you have ADHD your brain is constantly on the go whether good thoughts or bad thoughts. It’s the speed that is relentless. It is the moments of not thinking that really feels both refreshing and relaxing but can also feel terrifying as your brain rushes to try and fill the void and you have to work harder and harder stopping the rush.

Calm comes from meditating, from stopping the rushing flow, from staring into the bleakness – whatever form of meditation that might be.